Making Roads in Your County-City Safer

To learn how the safety of roads in your area compares with the rest of Maryland check out the two charts below.  The first chart shows the rate for all crashes and the second gives the fatal crash rate.  While safer roads had been the general trend in Maryland, one of the sharpest increases in fatal crashes in 30 years occurred in 2015 (see third chart below).

Why Maryland Roads Were Getting Safer & the 2015 Upturn

The chart above shows that Maryland roads have generally become less deadly over the past eleven years.  This improving trend has been attributed to:

In 2015, Maryland experienced the largest increase in traffic-related fatalities in a single year since 1985.  The increase may have been due to an 8.1% rise in the amount of driving done on roads throughout the U.S.  A significant part of this increase might also be attributable to more driving during the most dangerous times – Friday and Saturday night. Finally, the improving economy may play a role as well.  When unemployment rates decline, crashes increase.

Why Are Fatalities So Much Higher In Rural Areas?

The fatal crash rate chart shows that the roads in Maryland’s rural counties are far deadlier compared to those in more densely populated localities.  Lower fatality rates in the more suburban-urban areas is likely due to the slower speeds resulting from greater traffic congestion in these areas.

This relationship between congestion and fatality rates was confirmed in a 2016 paper, Urban sprawl as a risk factor in motor vehicle crashes.  As traffic congestion increases, vehicle speed declines making it less likely that a collision will result in death.

The High Cost of Traffic Crashes

Nationally traffic crashes cost $871 billion per year.   Speeding, intoxication and distracted driving account for 56% of crashes.  In Maryland, the cost of traffic deaths alone is $690 million annually.  According to the Insurance Research Council the average auto liability claim for property damage in 2013 was $3,231 and the average auto liability claim for bodily injury was $15,443.

Each year the Texas A&M Transportation Institute releases the Annual Urban Mobility Scorecard, which ranks 471 U.S. urban areas for traffic congestion.  The most recent ranking placed the Washington, D.C. area, including the Maryland suburbs, at the top of the list for most congested in the nation.  In 2014, congestion caused the average D.C. area motorist 82 hours in delay and $1,834 in fuel consumed while stuck in traffic.  The Baltimore area ranked 25th, which motorists experienced as 45 hours of delay and $1,115 in wasted gas.  The Insurance Information Institute rates Washington, D.C. and Baltimore the third and fourth worse cities in the nation for driving.

Maryland has adopted a Strategic Highway Safety Plan.  Thomas Gianni,  Chief of the Maryland Highway Safety Office, said the following with regard to the beneficial effect of the current and past plans:

“For the past two decades Maryland has drafted various iterations of a Strategic Highway Safety Plan; each one refining and building on its predecessor.  We believe the current document (2016-2020) includes the most comprehensive forward-thinking strategies for providing the greatest impact.  I do believe that along with tremendously improved engineering (in both vehicles and highway infrastructure) these continually refined strategic plans have contributed significantly to the declining fatalities on our highways over the past decade or so.  I also believe it’s a synergistic effect resulting from the collaboration & coordination of all four Es of highway safety – Engineering, Enforcement, Education and Emergency Medical Services.”

While the plan covers 17,824 lane miles of State roads, this is only a fourth of the total miles in Maryland.  The rest of our roads are overseen by local governments.  To make these local roads safer we need County and City versions of the Maryland plan. Unfortunately, only Harford County has adopted a plan, while Prince George’s County is in the drafting stage.  If you live in one of the other 21 counties or cities please consider urging your local elected officials to initiate a traffic safety improvement planning process. 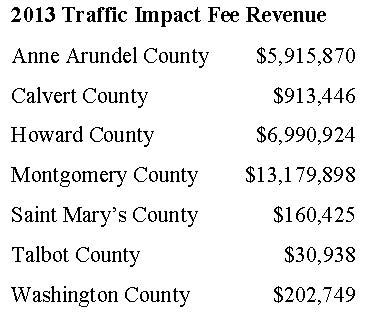 Shifting the Cost to Accommodate More Traffic from Taxpayers to Developers

Over the next 25 years growth another half-million homes will be built in Maryland adding another 4 million trips to our roads.  Accommodating this traffic will be expensive.  Impact fees provide a way to shift the cost for keeping roads safe as growth adds traffic from taxpayers to developers. However, only seven of Maryland’s 23 counties charge these fees (see table).

Adequate Public Facility (APF) laws are essential to preventing new development from making congestion and crash rates worse while traffic safety improvement actions are being implemented.   A good APF law will prohibit development from being approved if the traffic from a project will cause congestion to reach an acceptable Level of Service.

For example, the Baltimore County APF law is based upon procedures dating from 1965. These 50 year-old procedures identified only 11 intersections countywide with excessive congestion. With current procedures the number of excessively congestion intersections and road segments is more like 100 or 200.

A table comparing traffic APF requirements follows.  The table can also be viewed at: ceds.org/blog/TrafficAPFOTable.jpg 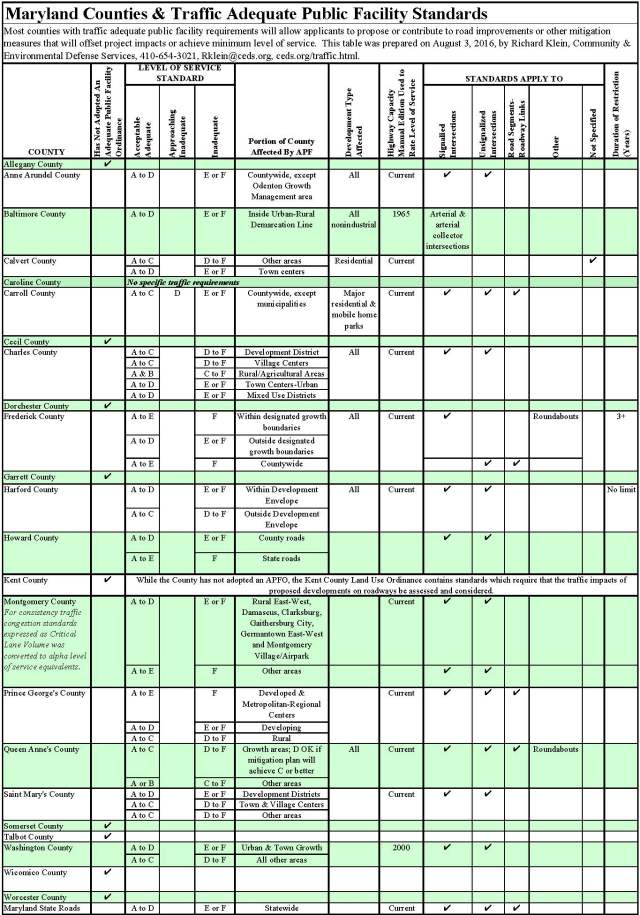 “Finally, there continues to be little evidence if the jurisdictions are using their APFOs to inform decisions about which projects should receive priority funding in county capital improvement programs (CIPs). There is little linkage or information about capacity improvement reported in APFO reports. APFO standards themselves are often lacking detail in available facility capacity. Available capacity, or capacity improvements resulting from developer contributions [impact fee?] or local government CIPs are simply not identified.”

For advice on how to improve traffic safety planning and preventing new development from making your local roads less safe, visit the CEDS Traffic, Development & Neighborhood Quality of Life webpage or contact us at Help@ceds.org or 410-654-3021.