Throughout the nation watershed advocates struggle with poor Clean Water law compliance, but this may change thanks to a very successful experiment in the Baltimore portion of the Chesapeake Bay watershed.

Courtesy of the Baltimore Metropolitan Council

Over a 12-month period, 70 volunteers and 40 local, statewide and national organizations carried out two surveys of the quality of erosion control on 140 constructions sites in the Greater Baltimore region.

In June 2014, the compliance rate with State and local erosion control laws was 23%.  A year later, when the survey was repeated, compliance had risen to 37% – a 61% improvement.  In just one year we reduced the amount of mud pollution from all the 450+ construction sites active in the Greater Baltimore area by 4,270 tons!

This success was achieved without any new laws, any law suits and without painting enforcement agencies as the bad guys.  Instead the goal was to educate the public about the need to provide elected officials and enforcement staff with the support needed to attain a high-degree of compliance.  The 61% improvement resulted solely from the public support generated through this effort.  This success was achieved at a fraction of the cost of a law suit and provides a basis for winning similar victories with regard to other poorly enforced Clean Water laws.

In fact, the volunteers and partnering groups have launched a second project.  Since the 1980s, 20,000+ stormwater ponds and other Best

Management Practice (BMP) have been built throughout the Greater Baltimore area.  Very limited surveys indicated that many of these BMPs had failed due to poor maintenance.  Last September and October nearly 50 volunteers surveyed a large sampling of these BMPs.  We found that 41% of the BMPs were in good condition while 25% have failed to the point that all the runoff pollution entering the facility flows out into a nearby waterway.  In other words, BMPs that could be trapping hundreds of pounds of pollutants annually are providing zero benefits.

Example of a Highly-Effective BMP – Bioretention

We anticipate that the BMP maintenance project and that focusing on ESD will bring about improvements comparable to that achieved by the highly-successful construcvtioin site erosion control effort.  For further detail on these three efforts see:

To learn how similar projects can be initiated in your area, contact CEDS president Richard Klein at 410-654-3021 or Help@ceds.org.

depends upon a high level of compliance with about a dozen key Clean Water laws enacted since the 1970s.  Without a high-degree of Clean Water law compliance the benefits of other efforts, like public education and restoration practices, will never show up in water quality monitoring results.  This is because the excessive pollution released due to poor compliance negates the water quality bendefits gained from these activities.  However, an experiment in the Baltimore portion of the Chesapeake Bay watershed lends hope to dramatically improving compliance.  The improvement is achieved without lawsuits or attacking regulatory agencies.  Instead, the focus is on providing enforcement officials with the public support needed to achieve a high level of compliance.

The initial focus has been on minimizing soil erosion on construction sites through the use of straw mulch and grass establishment.  Without any controls, the mud pollution released by a typical construction site can damage three miles of downstream waters with recovery taking up to a century.  Since the early 1970s, many states have required the use of erosion and sediment control measures.  The Nationwide permits for construction activities have brought all states into the fold. 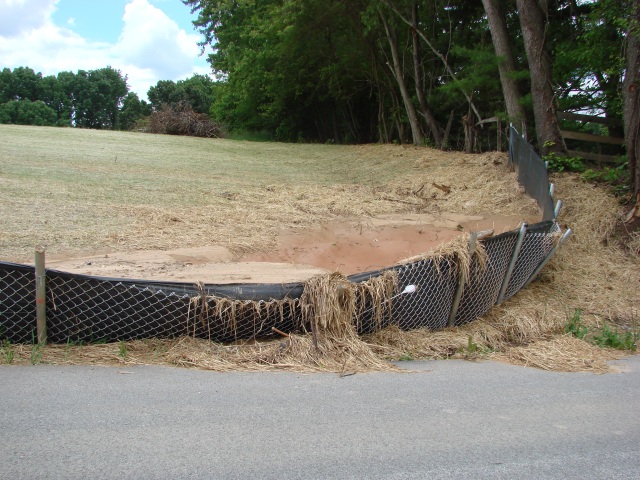 Sediment has flowed over top of this silt fence; an all too common failure

Unfortunately, most sites only benefit from the black silt fence and ponds placed along the downslope edge of a construction site.  While these measures are important, they only trap 5% to 50% of the eroded soil onsite.  Temporary stabilization measures like straw mulch and grass reduce mud pollution by 90% to 99%. Various scientific studies show that fish and other sensitive aquatic creatures will be damaged if construction site sediment pollution is not reduced by at least 90%.  And stabilization is the only measure that achieves this goal.  For each dollar spent keeping mud on the construction site with stabilization, we all save at least $100 in damages avoided. 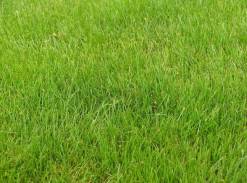 It is for these reasons that laws in all six Chesapeake watershed states and the District of Columbia require the use of mulch, grass, stone and other stabilization measures once earth-moving equipment have brought a site to the point where construction of buildings and roads can begin. Most states require the use of stabilization within 30 days after a site reaches rough grade.

According to the Chesapeake Bay Program model, there may be 87,000 acres of bare construction site soils spread throughout the 64,000 square mile watershed at any given point in time.  The model indicates that these sites are releasing 152,000 tons of sediment into the 100,000 miles of Bay tributaries each year.  But the Bay model assumes that two-thirds of the time a typical construction site is fully stabilized.

The Greater Baltimore Survey showed that stabilization is actually at 37%; not the 66% assumed in the Bay model.  And random assessments by the author of construction sites in other Bay watershed states indicates that stabilization is substantially poorer when compared to Greater Baltimore.  Achieving the goals set forth in the Chesapeake Bay Total Maximum Daily Load document may be very difficult if we cannot find a way to achieve higher stabilization rates on construction sites.

The organizations participating in this survey believe that the key to achieving a much higher degree of stabilization lies in the simple message: Exposed Soil=Pollution.  The only way to fully protect sensitive waters and downstream residents is to eliminate exposed soil by covering it with straw mulch or grass along with stone placed on roads and parking lot beds.  Other measures, like the black silt fence and ponds common to many construction sites, cannot retain enough mud pollution to protect our neighbors and the environment.  So, when you see exposed soil on a construction site assume a nearby waterway will be polluted come the next big storm.  As this message spreads we anticipate that exposed soil will become increasingly unacceptable to the general public.  Increased voluntary use of stabilization measures may then follow.