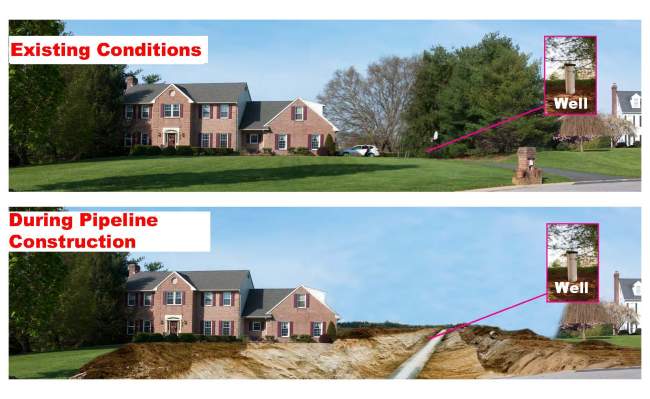 Throughout the nation there are 305,000 miles of natural gas transmission pipelines, with thousands of more miles proposed.  Those living near one of these projects can face an unimaginable threat and a great deal of frustration in achieving a reasonable solution.

Take for example the Harford County, MD family who live in the home pictured above.  The lower picture illustrates how their yard may look as the pipeline is built 59 feet from their house.

Last December this family’s concerns were reinforced when a similar, though much older, pipeline in an adjacent state ruptured sending fire out to a distance of 820 feet.  Each year there’s an average of 116 incidents along the nations gas transmission lines or about one incident annually for every 2600 miles of transmission pipeline.  These incidents resulted in an annual average of 2 fatalities, 11 injuries and $135,464,903 in property damage.

Though the probability of an accident is extremely low, this is of little comfort to the family, particularly since the pipeline company has an alternative route available but refuses to give it serious consideration.   The only agency with any real power over the pipeline project, the Federal Energy Regulatory Commission (FERC), has thus far also failed to seriously consider the alternative.

The proposed pipeline project is 21 miles long with thousands of other homes within the potential impact zone.  For more than a year the Harford County residents and many others along the 21-mile corridor have been questioning the proposed route.  While some route changes have been made, many other reasonable modifications have been given little serious consideration.

This prompted the residents to hire CEDS  last year.   Our first step was to research what works in winning pipeline cases by speaking with other citizen groups dealing with similar projects elsewhere in the US.  This research prompted CEDS to urge our clients to hire attorney Carolyn Elefant who specializes in representing those concerned about proposed pipelines.   Carolyn wrote Knowing and Protecting Your Rights When an Interstate Gas Pipeline Comes to Your Community.  We also brought in a respected pipeline expert.

So what have we accomplished thus far?

Well, we’ve clearly established that an alternative route is available which impacts no homes and fewer environmental resources.  We’ve submitted numerous comments to FERC documenting the advantages of the alternative.  We’re now waiting to see if FERC will take the time to thoroughly compare the applicant’s proposed route and our alternative.  An objective analysis by FERC will clearly show that our route is superior.

The situation is far from hopeless.  A few years ago CEDS succeeded in bumping the route of a major gas pipeline a half-mile to protect Indiana homeowners.   Though FERC has a history of approving every gas transmission pipeline application, in 2011 approval was denied for the Turtle Bayou project in Texas.  We also hope to convince the U.S. Army Corps of Engineers to support our alternative because of fewer impacts to waterways and wetlands.  The Corps is the only other agency which has substantial influence over pipeline siting decisions and the authority to consider aquatic resource impacts along with harm to neighborhoods.

President of Community & Environmental Defense Services (ceds.org)
View all posts by Richard Klein →
This entry was posted in News. Bookmark the permalink.